HOW TO PREVENT CHAZZED QUARTZ AND KEEP YOUR BANGER CLEAN

The evolution from titanium to quartz was not just an aesthetically pleasing transition, it also gave us a better way to savor the flavors of our concentrates and extracts and take in all of the terpenes and cannabinoids in a cleaner, more pure, and more efficient way than ever before.

There are few things in life more inviting than a perfect crystal clear quartz banger heated to the ideal temperature and ready for a dab of some top shelf terps. But, on the other hand, even the best budder, shatter, live resin, dank rosin, diamonds, or sauce will be considerably less appealing if they are presented alongside a cloudy, dirty, or “chazzed” domeless nail.

I'm not sure where the term “chazzed” came from but it refers to the black, sooty, or soiled look that many poorly cared for quartz nails take on over time. I went to high school with a guy named Chaz and he was not cool, and neither is busting out a heady glass dab rig at a sesh just to plop in a blackened banger.

You already know that DinoNail is your one stop shop for all dabbing tools and accessories, including an unrivaled selection of quartz bangers, buckets, nails, and attachments priced to please everyone from entry level to cannabis connoisseurs.

So we figured we'd give you...

TEMPERATURE SWEET SPOT
The act of dabbing concentrates has really not been around that long in the grand scheme of weed, but the evolution of the process over the past five years has been incredible to witness.
Gone are the days of heating a titanium nail until it looks like a space shuttle reentering the Earth's atmosphere and then judging the ideal time to take your dab by the color of the glow of the metal.
One of the best features of dabbing off of quartz instead of titanium is that quartz allows you to efficiently vaporize your concentrates or extracts at a much lower temperature, and the material itself is much more effective at retaining heat longer.

We now know that the perfect temperature for dabbing most forms of concentrates is somewhere between 300-400°F.

Unless you are using an electronic nail or some sort of heat gun, the best way to hit that range of ideal temps is by using a timer of some sort.

For example, you might heat up your quartz nail for 30 seconds and then let it cool for 50 seconds before applying your dab, hoping that the temperature dropped from ‘too hot’ into the ‘sweet spot’. Times will vary due to a lot of factors, including but not limited to: the style of your banger, the quality of the quartz, the thickness of the base of the dish or bucket, the ambient temperature around you, the strength of your torch, etc.

If you wait too long after the heat up, your oil or extract may not vaporize completely – even with the use of a carb cap. This is not the end of the world as you will lose some vapor but will gain a lot of flavor and cleanup is typically a breeze.

If you do not wait long enough, however, and the quartz banger or bucket is still too hot when you apply your dab, this is when discoloration and “chazzing” most commonly occurs. It is most often the result of too high of a temperature while dabbing.

To avoid this, and to keep your banger sparkling, absolutely employ a timer on your phone or watch, and start with a seemingly long wait after the initial heat up. Keep track of the timing and slowly reduce the wait until you hit that equilibrium of complete vaporization without the black charring inside your quartz nail. Make note of that heat up and wait time and stick to it for all future dabs.

ALWAYS BE SWABBIN’
If you told me half a decade ago that an essential tool to have at any dab sesh is a fistful of cotton swabs, I would have told you to stick it in your ear.

Since most dabs are taken while the surface temp of the nail is dropping, there is often a varying amount of residual and decarboxylated oil remaining in the base of the banger well after the rest of the dab has been enjoyed.

This is where a product like Cotton Swabs comes into play. Before the residual oil in the banger begins to stiffen back up, a thorough mop up with one of these high quality cotton swabs will effectively remove about 99% of any leftover oil. 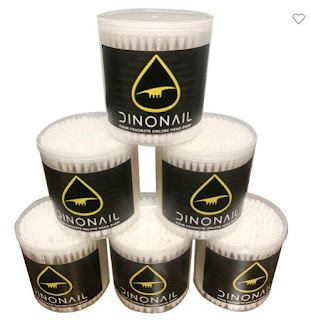 Not only will this give you a much cleaner palate to taste your terps from on the next dab, but it will reduce charring and chazzing and the risk of a small fire erupting in your banger the next time you try to heat it up.

Some dabbers like to keep their swabs submerged in isopropyl alcohol for the ultimate cleaning power.

So it's too late you say. You didn't see this article in time you say. For quartz bangers or buckets with baked on stains and dark discolorations hope for clarity may not totally be lost.
Quartz bangers can be soaked for extended periods in isopropyl alcohol. This long term saturation can break down the impurities causing the chazzing, and can sometimes restore the nail to a new or like-new condition.
Above we mentioned the cotton swab alcohol dip method, and like with that we know that iso alcohol evaporates so quickly and easily that no residual solvents should remain behind from dab to dab.
If you have your quartz nail hooked up to a competent enail, chazzing should be very minimal due to the precise temperature controls you'll have. Additionally, you can buy a non-flammable and non-toxic product and literally just carefully pour some into your quartz banger or bucket, filling it about halfway. Then just fire up your enail and gradually bring the heat up until it begins to bubble and watch as it magically strips away all the dark nastiness from the base and walls of your quartz.

BUDGET BANGERS vs QUALITY QUARTZ
We briefly mentioned it above, but two things that you really need to consider when either deciding on which quartz nail to buy or how to keep it clean once you have made the investment are the style of the nail and the quality of the nail.

Quartz bangers now have so many options – each with their own pros and cons – but some far easier to keep clean than others.

We carry quartz products at all price points here at DinoNail but it goes without saying that the more an item costs, the higher its quality will be. You will notice that higher end quartz products are easier to maintain and keep clean, but you can still put a lot of miles and a lot of dabs on our entry level options and keep them looking great if you stick to the tips we've laid out here.